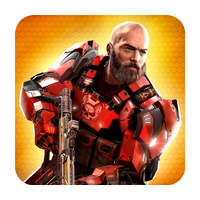 Requires Android: 6.0 and Up

Experience an epic story campaign, competitive PvP and cooperative multiplayer, and an innovative social hub, all in one FPS game!

In the futuristic world of Shadowgun Legends, humanity is under attack from a deadly alien invader. The last line of defense are the Shadowguns, legendary warriors and heroes. You are a young Shadowgun recruit with limitless potential who can turn the tide of war. So what are you waiting for? Join the fight and show the galaxy who’s boss!

RPG ELEMENTS AND CUSTOMIZATION
Choose from over 600 unique weapons including Handguns, Assault Rifles, Sub-Machine Guns, Heavy Machine Guns, Shotguns, Sniper Rifles and Rocket Launchers. From plasma beams to good old-fashioned lead bullets.
Collect over 1000 armor pieces and build your armor sets. Fortified juggernaut, sleek infiltrator or something else entirely? The choice is yours!
Make your Shadowgun stand out with 250+ cosmetic items
Pick your own skills and create your own playstyle – no classes, no restrictions!

UNIQUE REWARD SYSTEM – FAME
Become a celebrity of the Shadowgun Universe
Get rewarded for how you play the game. Your every action is appreciated with our unique fame system. The more famous you are the more the world will react to your actions!

Shadowgun Legends is a groundbreaking mobile game that blurs the lines between console and mobile gaming.

Shadowgun Legends Update 0.7.1 has arrived, with the Infusion system, Gold Arena, new Legendary Weapons, plenty of bugfixes and much more.
New Features:
Create your ultimate gear with brand new Infusion System
– Boost the Power of your favorite gear
– Power the process with four new materials dropping in dungeons, Gold Arena and from disassembled gear
The Gold Arena is here! Team up against the Torment and earn your rewards!

I like shadowgun a lot it’s a nice destiny clone for mobile. I think I would give this game 5 star and regularly play if PvP was much better. I can’t even get into a game cause it takes so long and I think more game mode with would help. I just think would better incentivize me finding away in mission if I could use my loot against other players

Im not sure what phone im gonna get yet but I’m getting a new phone strictly for this game. One day we won’t have a need for gaming consoles, sooner or later games like this among others will truly be an immersive experience that I can’t wait to experience for myself. Thank you for developing this beautiful game.

The game looks and runs great. Many modes and in game features and options to give a large amount of different customized experiences. Good and unique in game chat. What holds it back from being 5 stars for me is I cannot connect Google play and get achievements. It will not successfully connect so the achievements are useless for me so far.

This game has a very large major flaw. As you progress in the game you are forced to constantly change the weapons and armor that you are holding when I’m trying to say is if you have a weapon of power of 140 and you like that weapon and as you progress in the game you’re gonna have to get rid of that weapon because of the power level. I have been trying to contact the company by email letting them know that this game has a major flaw and I get this stupid nonsensical response. Is there a phone number I can call to reach them directly because they need to know that there’s a major problem with this great game

Shadowgun Legends Update 0.7.1 has arrived, with the Infusion system, Gold Arena, new Legendary Weapons, plenty of bugfixes and much more.
New Features:
Create your ultimate gear with brand new Infusion System
– Boost the Power of your favorite gear
– Power the process with four new materials dropping in dungeons, Gold Arena and from disassembled gear
The Gold Arena is here! Team up against the Torment and earn your rewards!

TechAdmin
0
ABOUT THE POKEMON GO: Pokémon go is the augmented reality game created by NINTENDO’S. it has already proven that it was a reality playing game...

TechAdmin
0
Limbo Game Download for Windows PC: The story line-up Limbo game goes like this, a boy enters the LIMBO for the Uncertain of his...

TechAdmin
0
The Tom and Jerry game is by global fun games. This Tom and Jerry mouse maze kids games is designed in android, Black Berry...

TechAdmin
0
Iron Man 3 Game Download for Windows PC: See how to install the game on windows, android and iPhone on the below section of this...